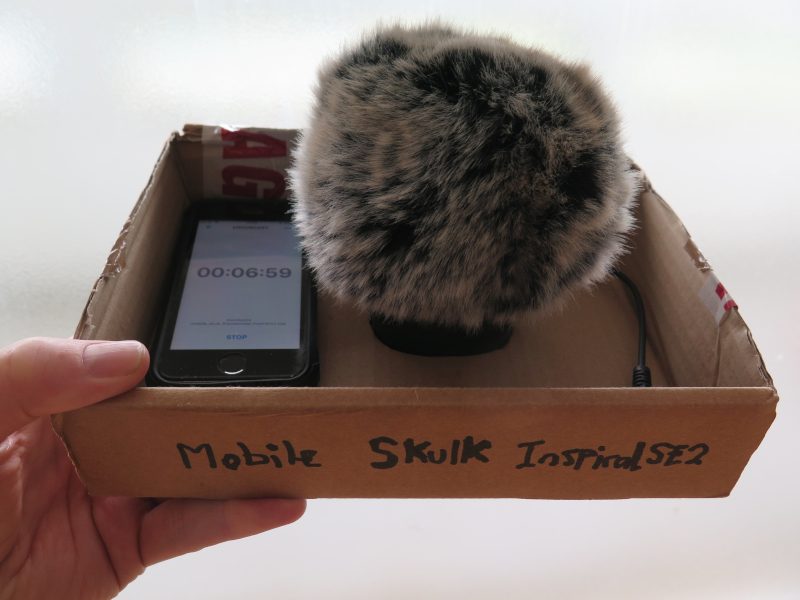 or listen to sound file here.

Following our first outing as a skulk of foxes –  Otherwalking with/as urban foxes across North & South London – follow A Skulk of Foxes part 2, a watery commons – lifelines and pathways for urban foxes or other wildlife on thie Saturday 16 May from 8.30pm-11.45pm.

Listen to our live collective exploration of London, as the foxes emerge from their dens and earths to scavenge or play; and as the individual skulks meet up in a variety of charming rendez-vous hear the city through human or non-human eyes.

Enjoy unique Live Stream Live Mix Event by tuning in on Events page from 9pm until around 9.45pm – This live event is made possible by soundcamp and Max Baraitser.

The North and South London skulkers ranged across a variety of habitats and environments on the night of May 2 – eve of International Dawn Chorus Day – and as part REVEIL Platform +. Here is a condensed response and record to the collected exploring of London by night as dusk fell; roaming through the city as or with our fellow creatures, with the ever-adaptable co-habitant, urban fox.

words from the remote surveyor

Walking the pavements from downtown Walthamstow,
via Vinegar Alley to Wood Street
we trailed the concrete hills
and stout sweet-smelling semi-detatched,
to join Inspiral, section 13,
near The Hollow Ponds.

May Blossom. An evening chorus by the allotment.

Orange street lights take us into a dark portal.
Soft stepping stones of moonlight through the damp forest.
Spectres of fellow Inspirallers flicker with us.

Near the Circle, a mysterious grassy disc,
bats looped and snapped dusty moths.
We stood in clearings listening to echolocation,
bat kisses, on our bat detector.

Dogs and their walkers signalling the Circle with their LED lights.
‘Sorry guys’ an excited staffy roughly kneads our legs with muddy paws.

Pond life crouches under the screach owl.
The wood are haunted by the love songs of tawny owls.

In a grassy dell below the bus stop,
by Snaresbrook and Woodford New Road junction,
two muntjac deer delight.

Pavements smother the forest and we follow them home.
From corners and borders,
foxes and humans watch us warily.

At around 10.30 pm the South East London Skulk arrived for a charming meeting by the Southern entrance of the Woolwich Foot Tunnel. There were 5 foxes – Calum F Kerr & Miyuki Kasahara from Thamesmead, Charlie Fox from Nunhead, James Eastaway from Brockley and Keith Turpin from South Peckham converged to share their territorial findings.  The Nunhead skulker gave a reading form this human perspective on the fox:

“In the ha-ha wall, at that part of the orchard where the highway hedge comes up, is the square mouth of a rather large drain. The drain itself is of rude construction – two stones on edge and a third across at the top. It comes from the cowyard, passing under the outermost part of the garden a considerable distance away from the house. Very early one morning the labourers, coming to work, saw a fox slip into the mouth of the drain through the long grass of the meadow on which it opened. In the summer, the cattle being all out in the fields, the drain perfectly dry, and it was known that now and then the rabbits from the hedge made use of it as a temporary place of concealment. No doubt the presence of a rabbit in it was the cause of the fox entering in the first place. The rabbit must of had a very bad time of it, for, the drain being closed at the other end with an iron grating, no possibility of escape.

From the traces in the grass and on the dry mud at the mouth it appeared as if the fox had ventured there more than once; and, as there were many chickens about, his object in lying here was evident. The great hedge being so near, and the narrow space between full of tall mowing grass – the edges of the ha-ha wall, too, clothed with stonecrop and grasses growing in the interstices of the loose stones, and further sheltered by a low box hedge – it was a place almost made on purpose for Reynard’s cunning ambuscade. He is bold or even bolder than he is cunning. A young dog sent up the drain came back quicker than he went, and refused to venture a second time. The fox remained there all day, and of course ‘made tracks’ at night, knowing that his presence had been discovered by the commotion and talking at the mouth of his cave. He might easily have been captured, but that was not attempted on account of the hunt.

Though the fox as a general rule sleeps during the day, he does not always, but sometimes makes a successful foray in broad daylight. Fowls, for instance, at night roost in the sheds at some height from the ground – often the sheds are contrived specially to protect them; but in the day they roam about in the vicinity of the rickyards where they are kept. They will make runs down the centre of a double-mound hedge, and while thus rambling occasionally stroll into the jaws of their foe, who has been patiently waiting hidden in the long grass and underwood. In the day, too, rabbits often sit out in a bunch of grass, or dry furrow, a long way from the ‘bury’. Their form is usually within a few paces of a well-marked ‘run’ – they follow the run out into the field, and then leave it and go among the grass at one side. The run, therefore, sometimes acts as a guide to the fox, who, sheltered by the tall bennets and thick bunches, occasionally glides up it in the daytime to his prey.”

The Foot Tunnel where we meet is on InspiralLondon Segment 21 and joins to Segment 22 North of the River as the trail curves again northwards along the River Roding. Approximately a mile south of the foot tunnel, the trail passes over HA-HA Road, on Baracks Green by Woolwich Arsenal. As we returned along the River passing the  Tate & Lyle Factory, on the north bank of the river and in the Old Royal Naval Shipyard, Peckham skulker recalled passages from a book – Lady into Fox, written by David ‘Bunny’ Garnett – published in 1922. In this short fantasy – the 24 year old Sylvia Tebrick, turns into a fox while walking in the woods with her husband.

The metamorphosis of the city somehow complete, along the deserted Thames Path, a deep silence blankets the River. We walk in single file. There, a brief sighting through the gates of Day Aggregates; a mature Fox – ‘Sylvia’ – unexpectedly pelting across the lit-up yard at speed, turns and at rest under a shining mound of gravel, peers back at us, intently. We slip away, as swimming foxes crossing the river, into Silvertown time, the lady transformed into fox appears on the horizon. (counterproductions 02/05/2020)

Miyuki and I also reached Woolwich, ending our Skulk at the foot tunnel, many birds up to dusk, including geese and four possibly different fox encounters on the ridgeway, plus heard and saw a fox cry out in Woolwich by the Thames.

Dawn on Friday 8 May is 4.39am UK London Time
InspiralSE2 – InspiralLondon associate artists Miyuki Kasahara and Calum F Kerr took part in A Skulk of Foxes for InspiralLondon commissioned Reveil plus project 2020; broadcasting on 2 May on their walk from Thamesmead to Woolwich and as response to skulking: On Friday 8 May from 4.30am – 6.30am (UK London Time) live audio stream of the dawn chorus walking to, in and from Lesnes Abbey Woods.

Oxlea woods were spookily quiet, atmospheric for me but probably not great radio except when I stumbled over stuff in the dark. I got to the start of of Woolwich Common, there was mostly just traffic noise around there and it was getting late and wanted to be able to walk home safely. On the way back through Mottingham, I did get two foxes calling, a frog croaking, two horses rustling in the hedge and a donkey braying.

Total fox counted 7:  5 identified visually and 2 caught on audio. I have a photo  of one fox sat still, long enough for me to capture on Eltham College field.

North London:
Alex McEwen & Jamie Beddard – Finsbury Park skulkers:
Charm from Muswell Hill to Finsbury Park – bats at dusk flitting over the New River were a highlight, as was the heron gliding over as we enjoyed the night air.
Richard Couzins – Clapton skulker:
I walked a part of section 7 Trail along the Lea onto Stamford Hill before meeting Will Brook (stoke Newington skulker) at Abney Cemetery. The first part was so quiet compared to a normal, slightly balmy, Saturday evening. Because of my focused listening and the reduced background noise I encountered sounds as a series of events; an angry child bumping into their front door, the wings of two pigeons flapping among the large leaves of a tree.… Later Will and I had 3 sightings of foxes, one south of Church Street and another near Clissold Park, although we think we saw one fox twice, passing it on the way and on the way back. I didn’t make a recording and am tempted to repeat the walk – a great evening…
A film of the Skulk can be viewed here:
The next Skulk is scheduled to take place on the weekend 16/17 May 2020.