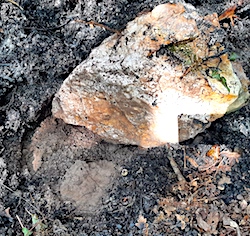 Against the clear blue of the sky a reddish billowing smoke, rises above the oak trees. Starting to walk up the path we turn off into a field where a small herd of black bullocks and bulls shelter in the shade. They seem unmoved by the approaching fire, but here in the field you can look up along the shallow valley to the moor and see the burning smoke drifting from right to left. But still unable to make out where the fire is located we decide to walk on up the shaded path. The sun’s heat is still intense, this has been the hottest day ever recorded in central Brittany, and yet all seems peaceful, calm even. Apart from the smoke glimpsed above the sappy green tree canopy that lines each side of the track, there is no sense of something amiss. Do the animals know? I am more alert now and aware that the fire is somewhere near, passing a field of trees, I look into a small sloping meadow, mown bald, with one large round hay bale near its entrance. It seems fine here too, but walking on into centre of the field towards the boundary of trees that form the edge of the farmed land, we see the fire flecks of orange beneath the thickening smoke. The air here is clear but perhaps 300 metres away on the dry gorse moor, just under the line of the electric pylons, the ground is fiercely burning. The wind is turning the dark orange flames and it is not clear which way the smoke is heading, that might give an some indication of the fires direction. It seems foolish to go any further now, as this is all the proof we needed that the fire indeed is unpredictable and near enough now to consume the land around us in its advancing fury. These swirling clouds that fill the evening air are not water vapour but choking ash, and the line of the fire that advances is apocalyptic now.

Tuesday 11 am, over 20 hours since the fire caught hold and I walk between two scorched walls of the footpath towards the chapel at St Michel de Brasparts. Two blue butterflies flit across my boots, small remnants of unburnt gorse cling to the stone work.

The sun’s appearance has begun to transform the apocalyptic dreamscape quality of morning when the fields cloaked in an enveloping smoky mist gave the impression I was walking in the land of the dead.

In natural fires, there is balanced struggle between destruction and creation. Lifting up the stones where the fire passed I can still see bare earth, and creatures alive in the dry soil.

How it cuts across the surface of the moor – consuming the fiery gorse in aflaming advance – tongues come 200 metres close to where I was staying. How the heat abates, and a storm comes with rain to dampen down the fires’ rage.

Swirling clouds in the evening and the line of the fire is apocalyptic. Monsier Troemur has got lost in his fields. Midnight and we are knocking on his door which is not locked and we know he is somewhere close.

But is seems to have stayed in the moor and only passed into the fields in small patches. The contrast one side of path where the ground blackened and grey still smolders with the green verdant edge of the woods the other side – or fields bare grassy fields still with hay bales.

We are in the hostel and it is dawn – the sound of rain is greeted with a cheer – a short storm that must have helped dowse the fire. Later a drone passes overhead and all day the sound of a helicopter watching the fire’s progress. A very different sense of space up above from than the one felt on the ground, where space is measured by the fire’s approach, uneasiness and the odour of a dry choking wind. 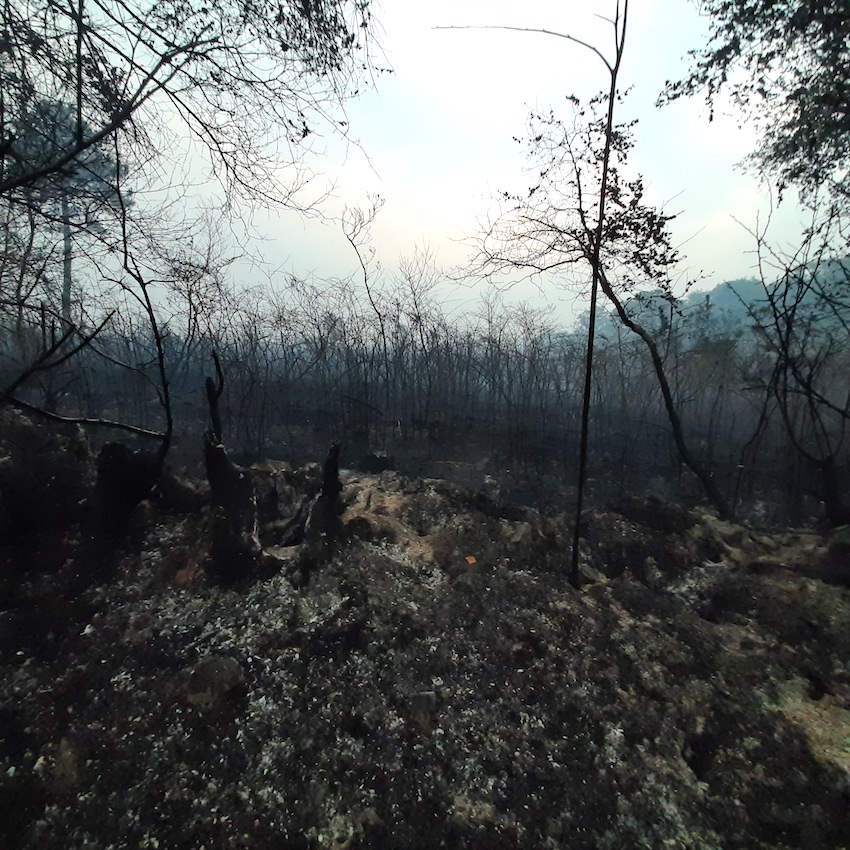