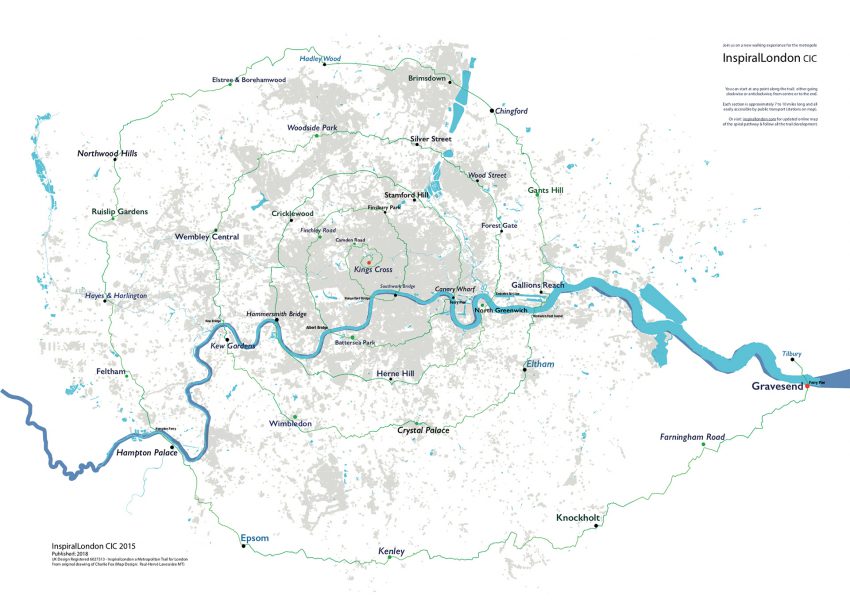 With the support of funders, notably Arts Council of England, MT and counterproductions InspiralLondon commissions and produces, with invited artists/contributors, a number of publications including:

You can browse sales page for individual items and order copies online for postal delivery. Sales support the work of the trail project.

More map/phamphlet commissions are planned for 2020-21:

Rachel Gomme Street Tree Twinning Project for InspiralLondon: is an ongoing project that celebrates the intrinsic value of street trees, the resiuces they provide and their resiliance in the urban environment.

Soundcamp sound mapping of walk in July 2019 – around Hawk’s wood and along trail offering some notes on sonic mobilities, boundaries… as one walks segment 24 (Design by Sam Baraitser-Smith 2020)

from Flotsam to Jetson: Sailor Forbes Spirit Guide no. 235

A guided detour from Segment 21 Eltham to Woolwich passing through Woolwich Old Docks – to search out traces of Sailor Forbes and his antisigns. This detour map was commissioned as part of The Ghost Tide exhibition at Thames Side Gallery, 19 October to 4 November 2018. An updated version of the detour and antisigns will be printed in 2021.

Darks – A queer stumble through time. Published by InspiralLondon CIC/counterproductions 2018

Anne Robinson’s unique series of poems and text that draws on experiences of walking; as well as inhabiting areas of Kings Cross and East London that have now been erased by gentrification and hyper-development.

Anne Robinson ia an artist who lives and works in east London. Her practice is concerned with the perception and politics of time passing.  ISBN: 978-09556370-0-3