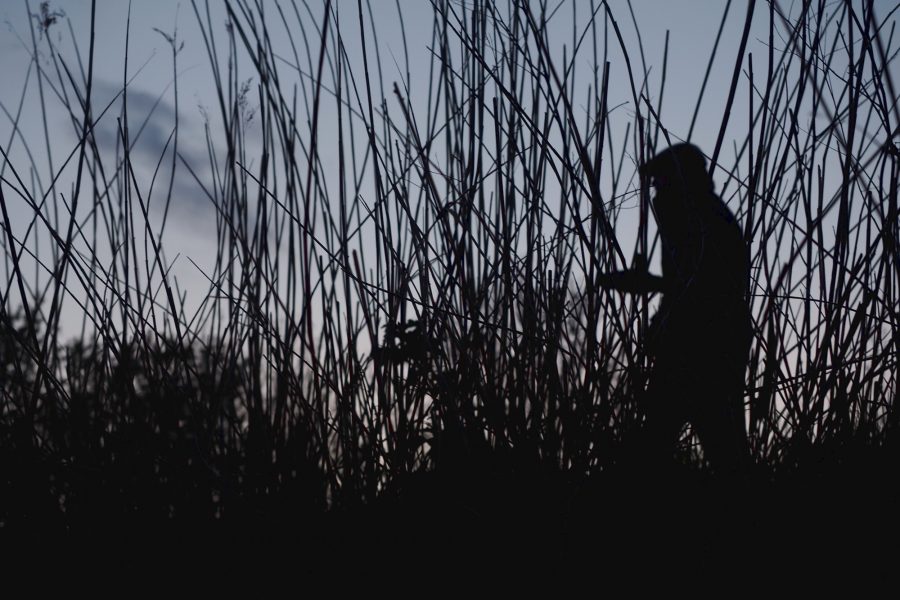 At 19.15 (7.15 pm GMT) on 1st May InspiralLondon curated a livestream mix – Hydracity Streamings – from four duskscape sites, tracking aspects of the watery commons hidden beneath the dusk chorus. The mix made from four urban or semi-urban sites, relayed differences in ambiance as we explored variety of sites, flowing through early twilight from North Marseille to Thamesmead, onto North Peckham and across to a strip of ancient woodlands, meandering by a stream through suburban Reading.

At 8pm (7pm GMT) Charlie Fox walked from the hills of St Henri toward L’Estaque to rendezvous with members of the Hotel du Nord, at Miramar. A period of heavy rainfall had just lifted, creating sheets of water that ran off the tarmac in dark slippery strokes. The city of Marseille suddenly waterlogged, dripped and oozed water from places that ordinarily are bone dry. It was a sign of renewal and new beginnings that water brings, refreshing the earth and giving new life. Apt then, for beginning this livestream audio event, by exploring something of the unkempt and undervalued beauty of this hidden paradise – a remnant of villa park – trapped between the railway, a new road for port container storage and a steep escarpment, on which a haphazard community of houses and factories sit. Perhaps because of the recent rains the birds were subdued but the site presented its rare inestimable beauty in the odours, scents and rustling of an overflowing water that made the ground spongey, almost friable beneath our feet.

In meeting Julie Demuer (representing Hotel du Nord), by the site of two felled pine trees, we were able to share briefly, something of this fragile but tenacious beauty, incarnated in this unique plot of land. Only the day before and one week since the trees on the site were scheduled to be chopped down by the new owner, had the community of L’Estaque (Sauvons Miramar) had definitive news that the site had been protected*. With its unique biodiversity, its cultural, heritage and social amenity value, one small but significant parcel of watery commons has been saved from imminent concretisation and development.

*Two large mature pines had already been felled before the alarm was raised.

It was a perfect beginning for Hydracity Streamings before passing onto Thamesmead, once one of Europe’s largest housing estates, built on marshy ground.

As Thamesmead Canal Chorus – Calum F Kerr and Miyuki Kasahara – started an exploration around Southmere Lake; among this newly landscaped environment, now crisscrossed by canals, lakes and pipes in between a new layer of concrete and housing.

This site teaming with coot, geese, grebe, moorhen, swan, and tufted duck was unusually quiet but for the swooping house martens.

However this stream was still able to track above ground and below ground – along the “ridgeway” path – watery habitats, canals and pipes. And in the twilight the rustlings of reeds and marsh plants.

Thamesmead passed onto Peck Marshland Chorus, relayed by Rachel Gomme; a walk exploring ingress/outgress from Peckham Common reflected on free flow/restriction of watery commons. Rachel followed the course of the Peck Stream from Earl Sluice back to its source on One Tree Hill.

Hydracity Streaming finally reached an Earley Chorus  with Sarah Sparkes and Ian Thompson bivouacing in what remains of the ancient Forest of Earley – a precious strip of woodland lost in the depths of Reading’s suburbia. This listening site was carefully located next to a meandering stream, that eventually flows into the Thames via the river Loddon.

At 19.15 (7.15 pm GMT) on 1st May InspiralLondon starts a livestream with a short introduction to our collective Hydracity Streamings Chorus, a mix of watery duskscapes, flowing through early twilight from North Marseille to Thamesmead, to North Peckham across to ancient woodlands, meandering through suburban Reading. You are invited to live mix the streamings by navigating the duskscapes, by following the shifts of focus, as dusk moves towards Reading.

Starting 19.15 London Time from North Marseille Chorus (Charlie Fox) we will be wading long, in the vicinity of North Marseille’s unkempt streams and watery hollows.

Focus from 20.15 on Peck Marshland Chorus (Rachel Gomme) ingress/outgress from Peckham Common reflects on free flow/restriction of watery commons. Following the course of the Peck Stream from Earl Sluice back to its source on One Tree Hill.

Focus from 20.35 on Earley Chorus (Sarah Sparkes and Ian Thompson) will bivouac in what remains of the ancient Forest of Earley – a precious strip of woodland lost in the depths of suburbia next to a meandering stream that flows into the Thames via the river Loddon.

Our Chorus Streamings introduction includes some occassional live discussion: of the listening sights; the critical and practical aspects of Hydracity explorations; collective ways of listening inspired by soundcamp; the relationship of our ‘on the ground mapping’ with ‘on the ground listening’; auraldiversities and the otherness that oozes from the watery commons.